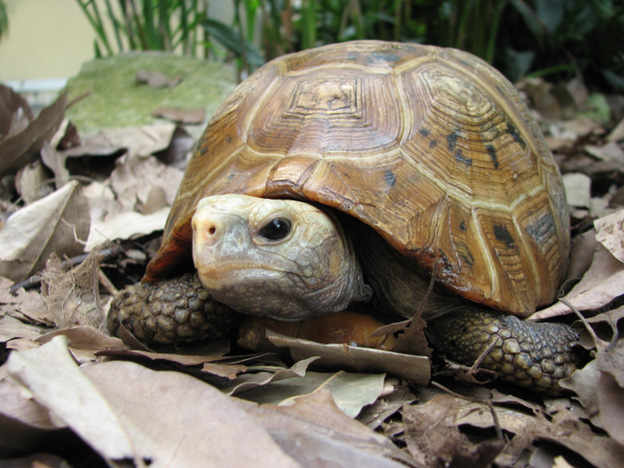 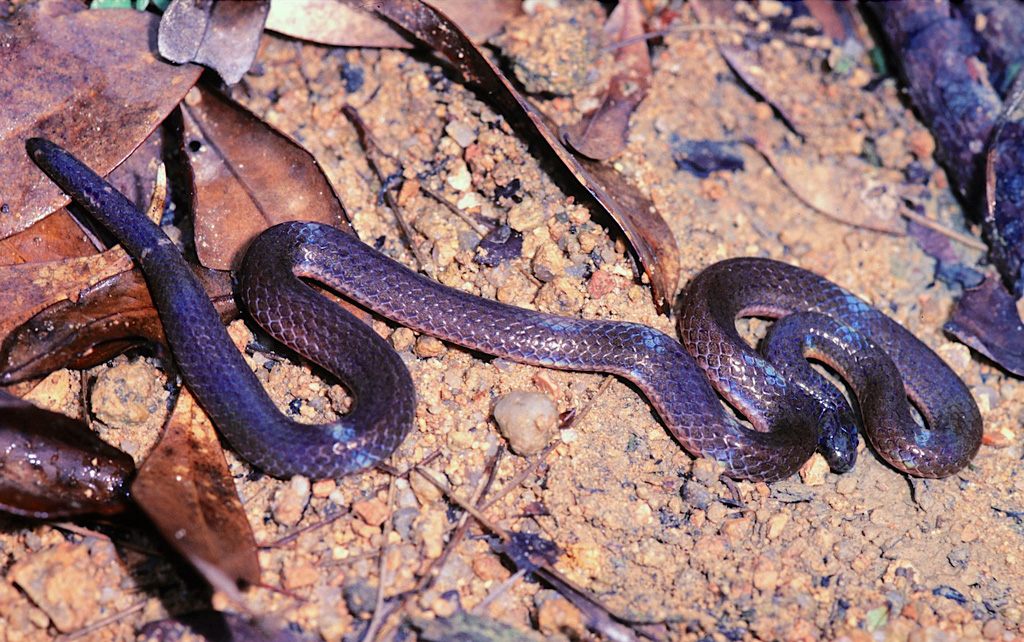 On Buddha’s Birthday – Give Nature a Thought

On the 19th May we celebrate Buddha’s Birthday. It is almost refreshing to know that Buddha in his great wisdom placed so much importance on the human connection with all living things. Buddha was probably the first great ecologist (if I can suggest such a mortal accomplishment), the first to fully comprehend how all things are connected and how important balance and harmony are, not only in nature, but also in humans – because we are part of nature.

Buddha may be horrified to see the wide abuse of nature and how the abuse can even tarnish his own name in the guise of celebrating his big day. In many cases his teachings of mercy, harmony and merit become twisted to suit human wants and needs. Commercial operators motivated by profit will take advantage of the special day and may cause great pain and suffering for many animal species, trapped in the wild to sell back to the wild.

Merit or Mercy release activities often bring out the worst in humans and not the best. Sometimes this is the result of ignorance, good intentions not being followed through by good actions. Some of these cases may just require educating to understand where the animals came from and what is likely to happen after release.

Unfortunately, there are those releasing animals that when questioned about their actions, respond that the act of release itself brings the merit and blessings and it does not matter whether the animal suffers later, that would be the result of the animal’s fate! This is a sad way to consider the action of mercy giving and I seriously doubt this interpretation of Buddha’s teachings is correct.

The truth is that many animals released through merit release are weak and sick when they are purchased, have often been caught from the wild just for the purpose of release back to the wild (as previously mentioned) and are often released in totally unsuitable habitats ie freshwater turtles released in the sea.

Furthermore, the mode of release itself can often be cruel and affect the animal’s future chances of survival ie fish dropped several meters in to the sea from a boat, animals released into unsuitable habitats where they will not find food and risk passing captive transmitted diseases to native animals…

If you really want to celebrate Buddha’s Birthday by helping wildlife, why not donate to those organisations whose role it is to tirelessly save many animals every day giving many species a second chance to be free in the wild or donate to projects that help to preserve native habitats thereby securing the lives of millions of wild creatures.

Buddha would surely be comforted by the person that saves one tree which is home to a thousand insects and birds than the person that releases 10 sick birds or 50 weak fish that perish soon after release often after suffering for several days.

Help us to celebrate Buddha’s Birthday in an appropriate way and promote harmony and balance in this increasingly turbulent world that we all share. Ghostly images of dead bullfrogs and a sickly American Red-eared Slider in a Hong Kong stream. Probably purchased from a fresh food market and unsuitable species for local streams. There may be feelings of compassion related to these releases but ultimately the animals suffer and risk spreading disease to many other animals in the wild. The releasers may not know the potential harm they are inflicting on the natural environment as a result of the merit release actions. Chinese Bullfrogs in the wrong environment. Animals are often weak and sick and do not try to hide. Disease can also be spread to native creatures in the stream, causing multiple deaths in the long term. 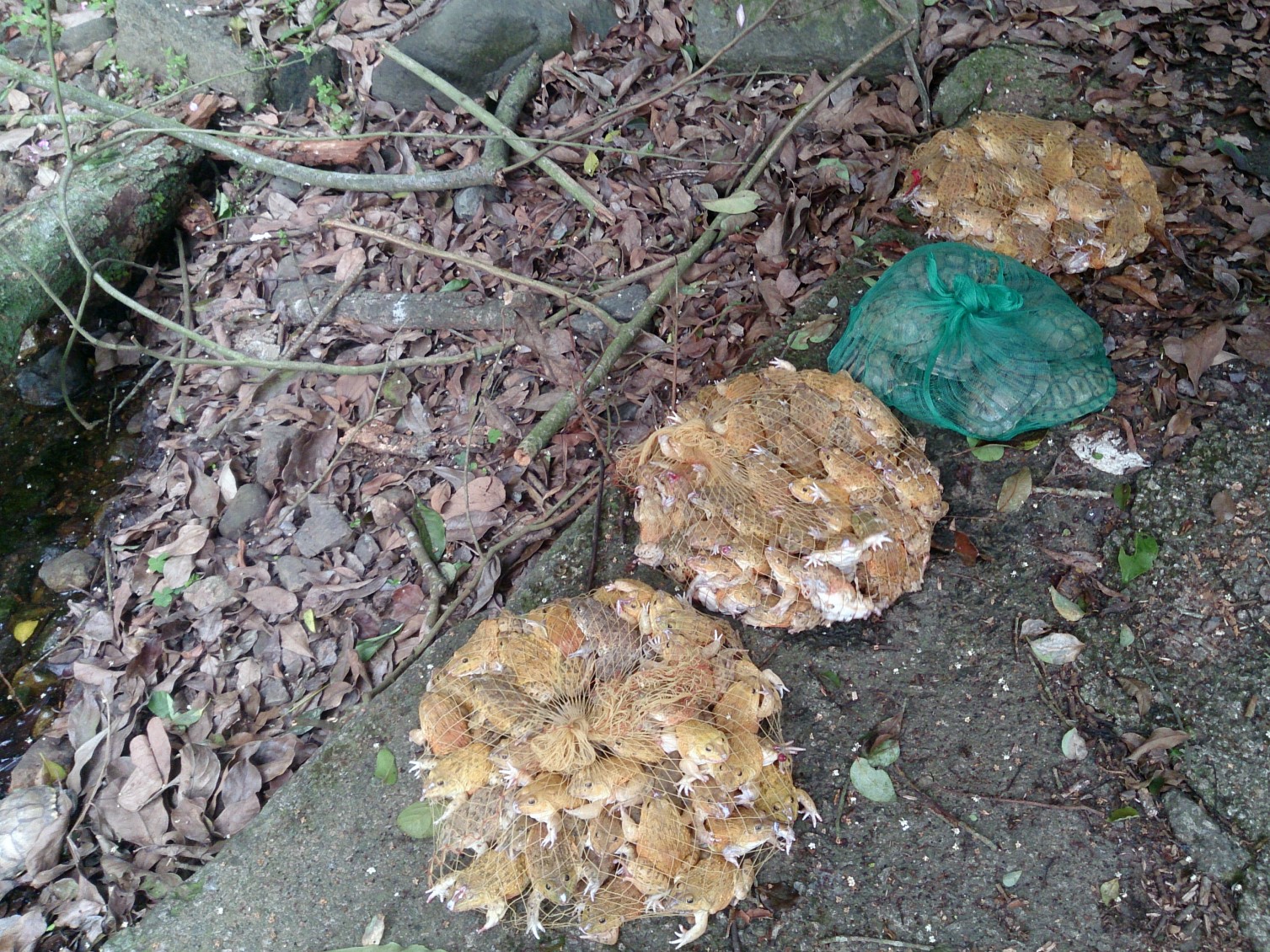 Cruelly packaged Chinese Bull Frogs and American Red-eared Sliders placed beside a Hong Kong stream prior to release. The habitat is unsuitable and most of the farmed animals will perish after release. 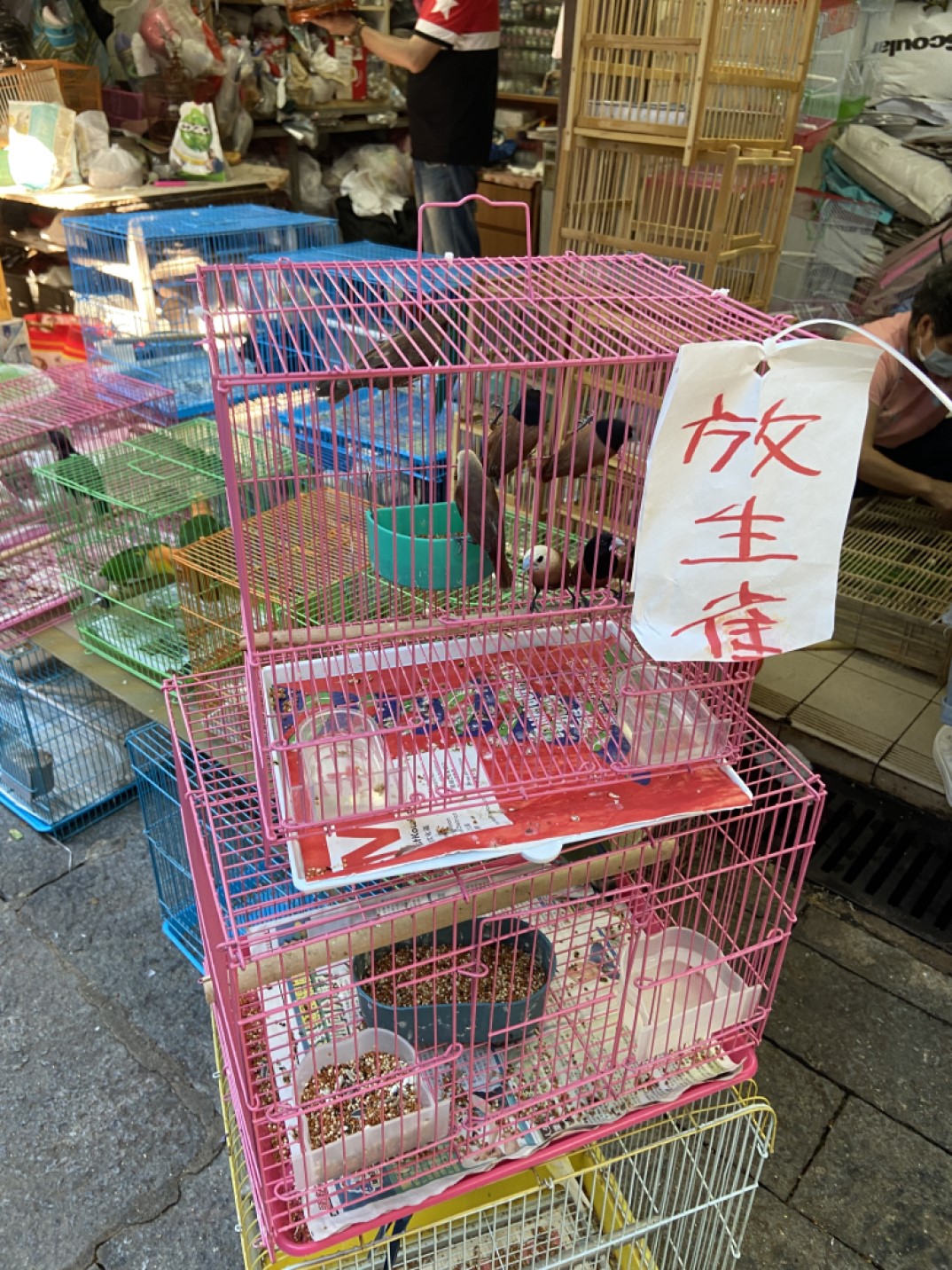 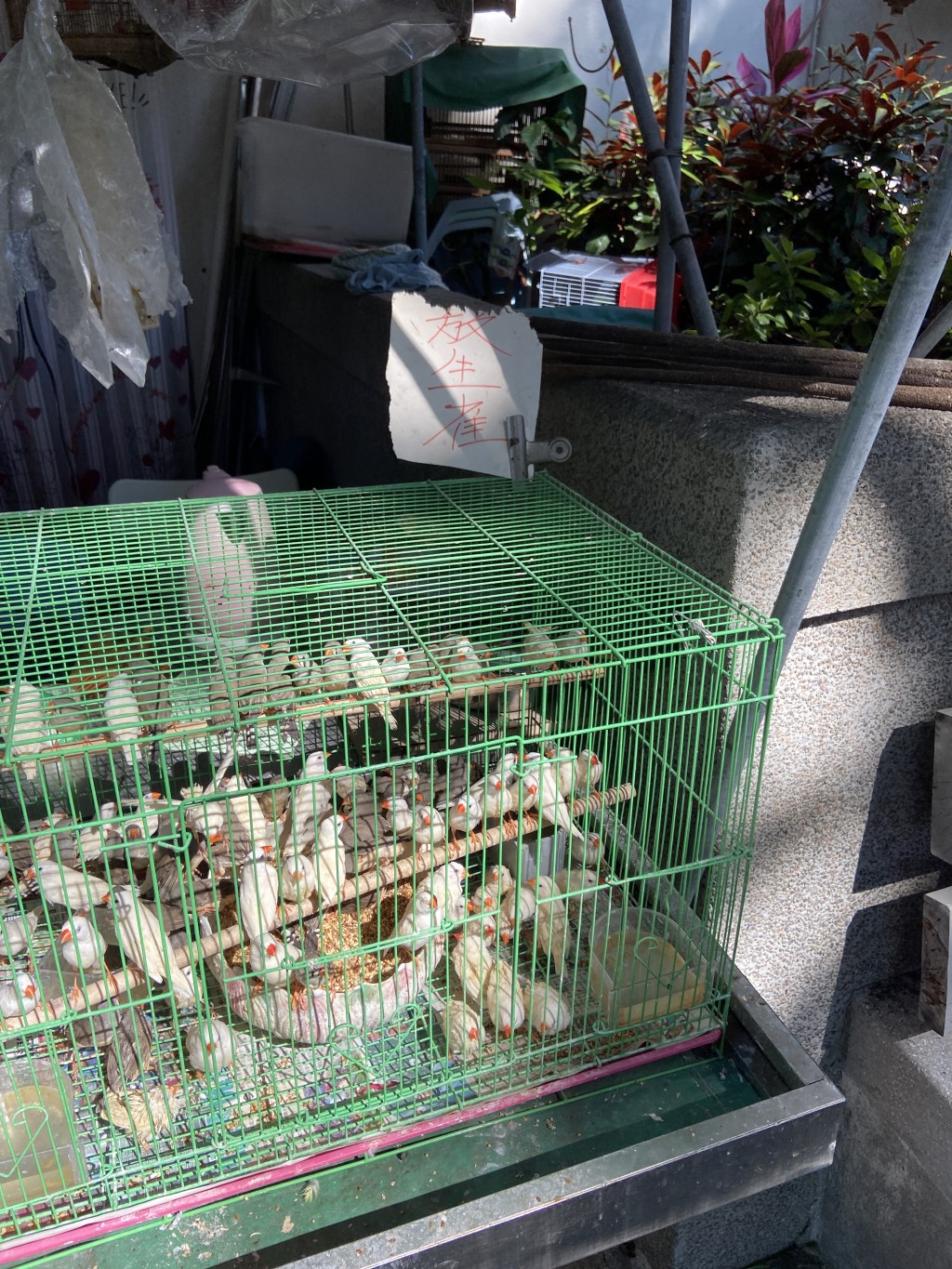 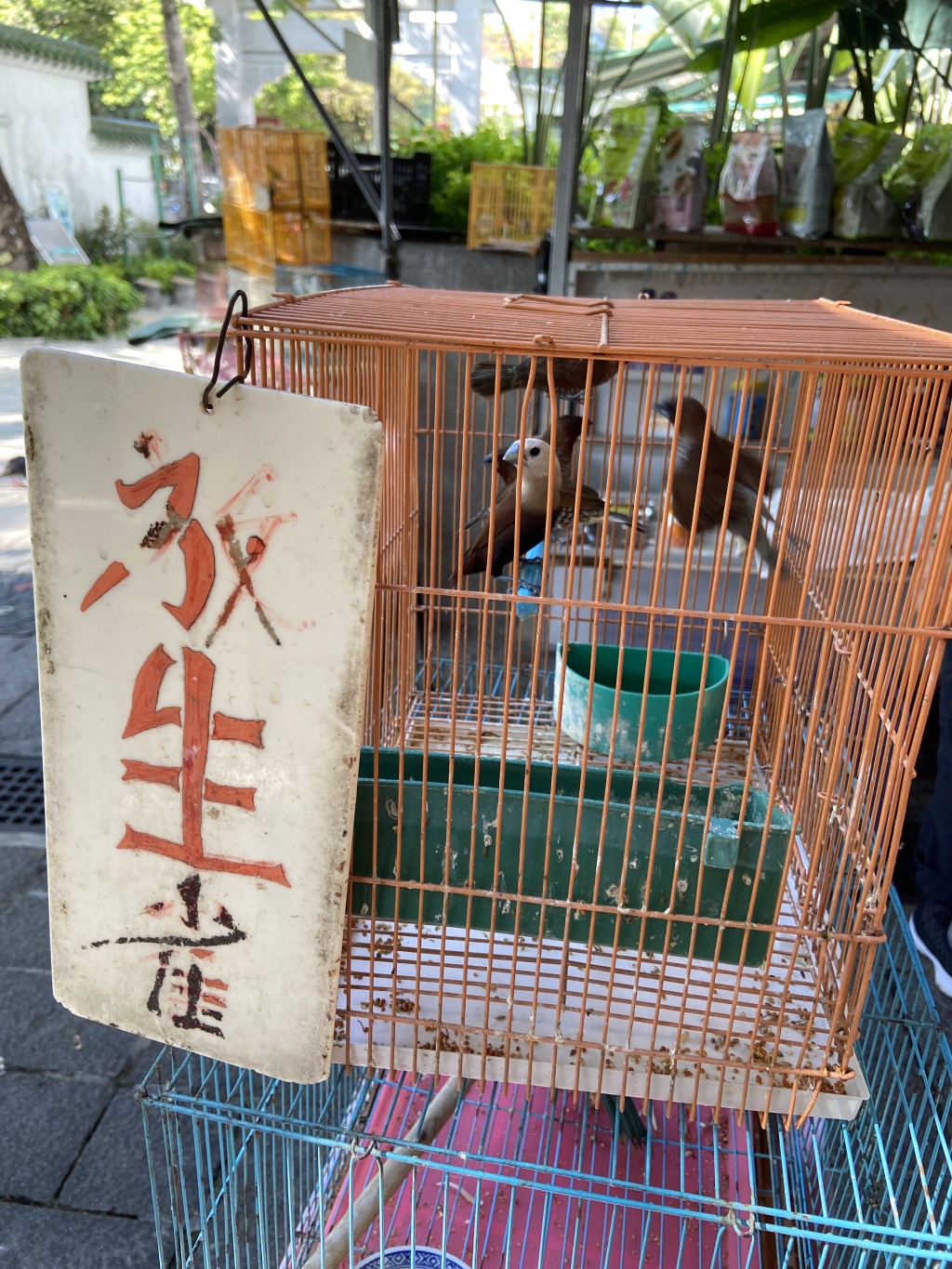 Cages containing munias for local release. The birds were captured outside Hong Kong and should not be released in the local habitats. 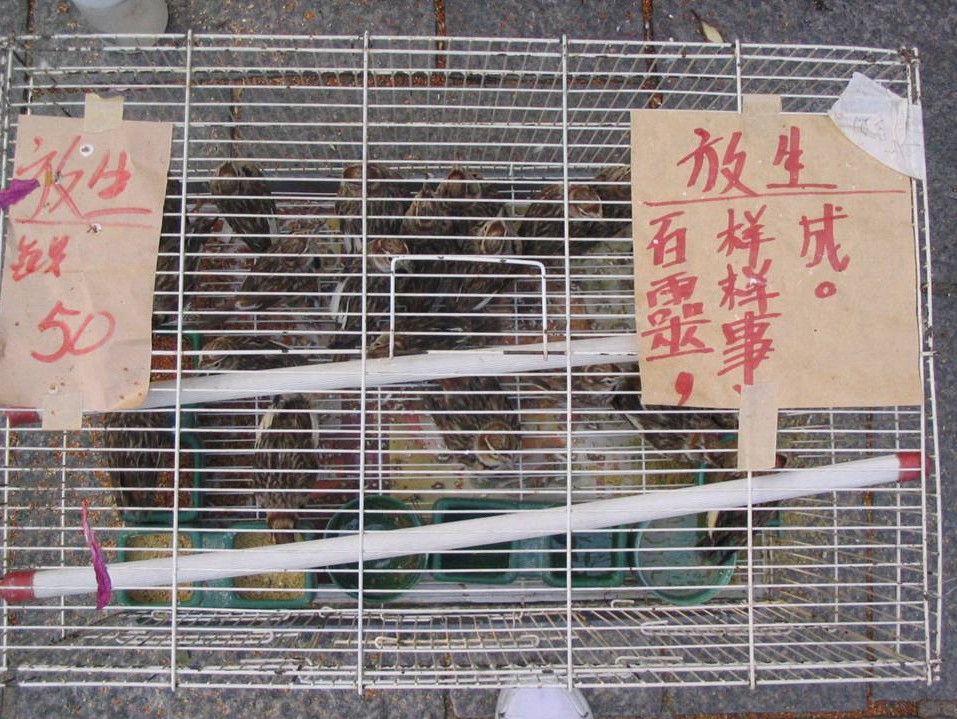 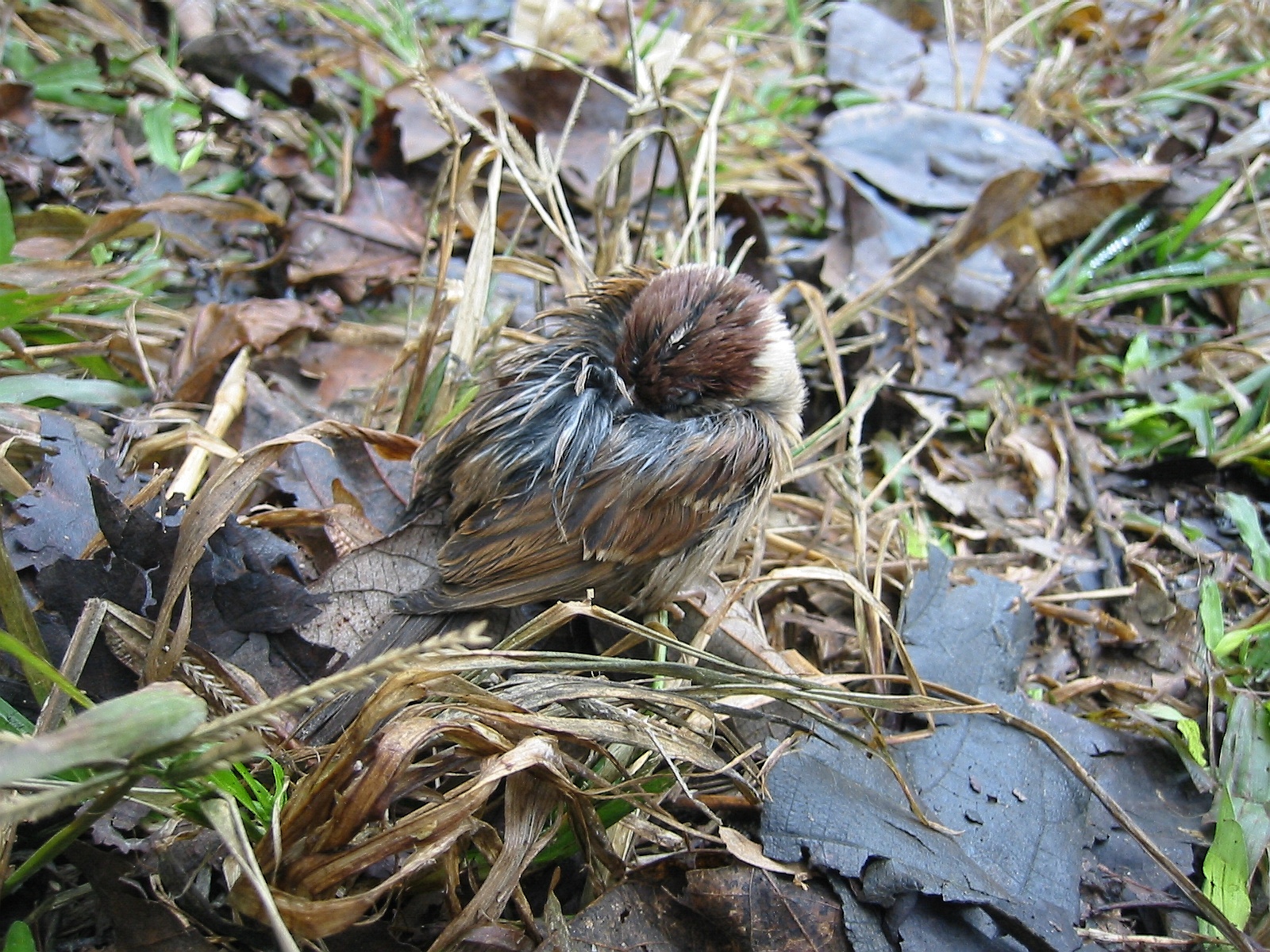 A sickly sparrow awaits its fate after a merit release.