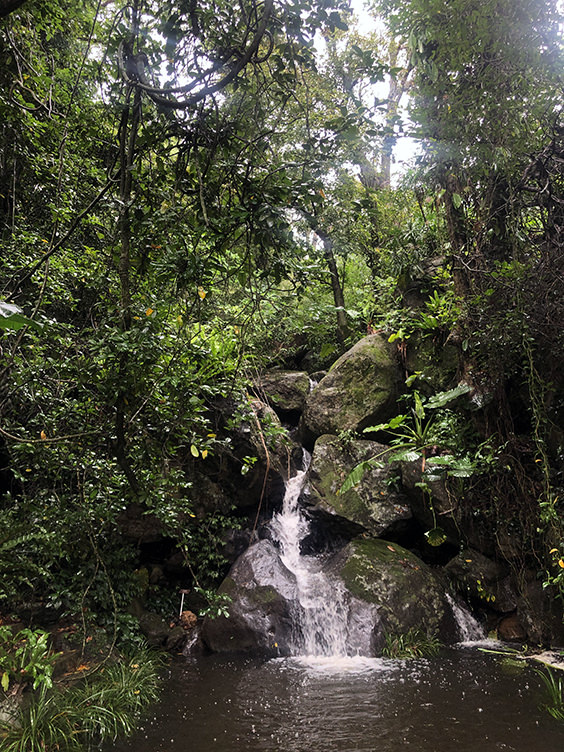 This wedge-shaped copse at the foot of KFBG’s valley was originally laid out as a pleasure garden in the 1970s using mainly exotic ornamental plants. Although the streamside slopes were terraced at that time, the site retains many outstanding natural features, none less than the enormous mossy boulders characteristic of Hong Kong’s dramatic granite-hewn streams.  The original planting has now matured and includes some splendid camphor trees (Cinnamomum camphora), a massive specimen of the locally very rare hiptage vine (Hiptage benghalensis) and one of the largest Birdwood’s mucunas (Mucuna birdwoodiana) in the territory. This curious leguminous vine puts on a show-stopping display of pungent yellow-green flowers every spring, which gives way to an enchanting hanging garden of large pendant pods through the summer.

The garden also abounds with unique heritage features, including the ceramic tiled Angled Bridge and two unusual pigeon coups. The stream itself is the heart of the garden and many small concrete dams can be seen along its course here; these were put in place to create ponds for the ducks that used to be kept here. See if you can spot the streamside shack that the ducks used to live in! The stream is now home to native wildlife. If you look carefully as you stride across the stepping stones, you may be lucky enough to spot a Hong Kong newt (Paramesotriton hongkongensis), which has a flourishing population in KFBG. Elegant little egrets (Egretta garzetta) and common kingfishers (Alcedo atthis) are also occasional visitors.

In addition to the original planting, the garden is now home to what has become Hong Kong’s richest ex situ conservation collection of native plants. Numerous rare and protected species can be seen here, displayed in naturalistic plantings. These include offspring of the region’s only known remaining wild Taraw palm (Livistona saribus) and the elegant Ford’s licuala (Licuala fordiana), an understory palm that is presumed to be locally extinct in Hong Kong. Other rarities include the king snake creeper (Passiflora cochinchinensis), a spring-flowering passionflower that is the only known local host plant for the locally rare red lacewing butterfly (Cethosia biblis). Another uniquely fussy diner that can sometimes be spotted in the garden is the white dragontail (Lamproptera curius), the world’s smallest swallowtail and a resident of KFBG. This lightning-fast butterfly will only lay its eggs on the Celebes illigera (Illigera celebica), a rare liana that is protected by law in Hong Kong.

The Walter Kerr Garden is bordered on one side by the Wildlife Walkthrough, Parrot Sanctuary and Insect House, and can be accessed from each of these. It is also the location of the popular Stream Life Display, Native Mammal Display and Jim Ades Raptor Sanctuary.