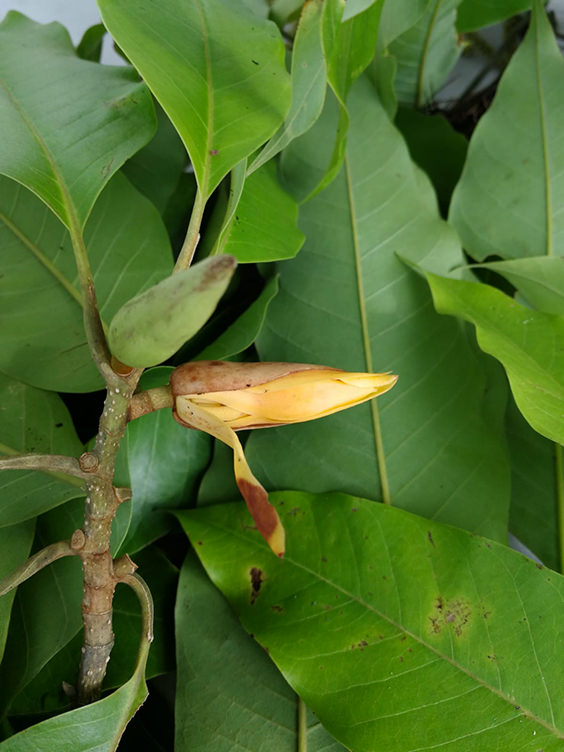 Magnolias are among the most primitive flowering plants, with large, spherical, flowers and hard, cone-like fruits that bear a mass of brightly coloured seeds. Fossils unearthed in Asia, Europe and North America reveal that the ancestors of this group of beautiful trees were already present in the northern hemisphere more than 100 million years ago. This predates the evolution of bees and explains why the fragrant flowers continue to rely on beetles for pollination to this day. The seeds, meanwhile, are enclosed in a fleshy pulp that attracts birds and small mammals. Around 300 extant species are recognised globally, most of them distributed in East and Southeast Asia, but with a substantial number also in the Americas.

KFBG’s Magnolia Garden was set up in the late 1990s when more than 40 endangered Chinese species were planted across ten terraces high up on the KFBG hillside. Several of the smaller, shrubbier species, such as Michelia crassipes, soon began to produce flourishes of purple, lightly scented blooms in the spring. Larger, slower growing species such as Magnolia maudiae, on the other hand, have taken longer to reach flowering size, although some now stand at over 20 m tall and regularly put on spectacular floral displays.

Almost half of all Magnolia species are threatened with extinction due to logging, habitat clearance and over-exploitation for use as ornamental plants, food and medicine. To help ensure the long-term survival of these magnificent trees, our gardeners collect mature seeds in autumn for propagation in our nurseries.

The best time to visit our wonderful Magnolia Garden is in early spring, from the months of January to June. Be ready for a magnificent display of graceful florescence.