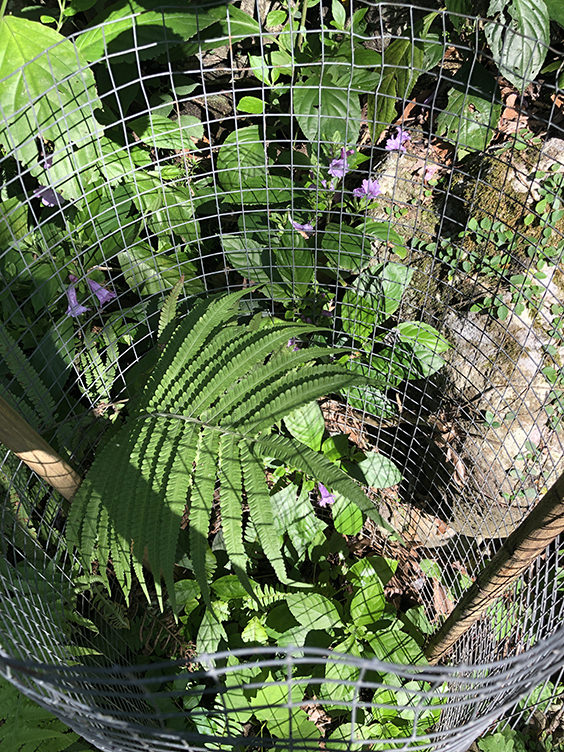 Today, many of these trees are well over 60 years old and a number of problems have emerged. For example, some of the non-native fruit trees that were planted in monocultures on the man-made terraces now form such dark, dense thickets, that no young trees can establish in their shade. As the ground is not covered by any vegetation, soil erosion is rampant. Although a large proportion of KFBG’s land became a nature reserve in the 1980s, many of the areas originally planted up as plantations are still dominated by these non-native trees.

The aged trees are also in poor condition. The Acacia confusa widely planted throughout KFBG, for example, has been repeatedly damaged by exposure to extreme weather, including the heavy frost brought by a cold spell in early 2016. Many of these trees are now in a critical condition and their falling branches threaten the safety of visitors and staff. In order to minimise risk, many tonnes of branches have been pruned in the past few years alone and a large number of failing non-native trees are being felled.

Pinus elliottii, a conifer from the south-eastern United States, was widely planted near Kwun Yum Shan and the Kadoorie Brothers Memorial Pavilion in the upper part of KFBG. Decomposition of their needles has altered the pH and other properties of the soil in which they grow, making it difficult for native species to establish. And because many are now dying of old age and disease, they too are being removed.

To facilitate recovery in the wake of the removal of these old trees, a large number of native tree seedlings are being planted, particularly along the Never-Never Trail, at the old Signpost Corner, on Kwun Yum Shan and around the Kadoorie Brothers Memorial Pavilion. The species being planted are native trees representative of mid-elevation forest, including ivy tree (Schefflera heptaphylla), Lingnan mangosteen (Garcinia oblongifolia), glossy leaved Elaeocarpus (Elaeocarpus nitentifolius), Chinese elaeocarpus (Elaeocarpus chinensis), Hance’s syzygium (Syzygium hancei), hog plum (Choerospondias axillaris) and Chinese whitewood (Endospermum chinense). All the seedlings are tagged and protected by tree guards, and their basal diameter and height are regularly measured.

Through the vigorous efforts of our arborists, ecologists and horticulturalists, KFBG’s hillside is slowly but surely reverting to mixed native woodland of high ecological value.