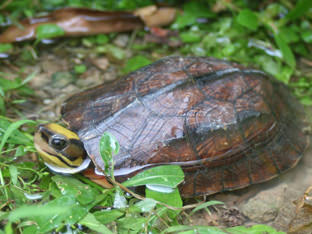 The Golden Coin Turtle is well known to the Chinese people as a component of traditional medicine, with unsubstantiated claims of having cancer-curing properties. It is also a talisman of good luck and prosperity. Unfortunately, the species has not had its share of good fortune. The turtle has been hunted to the verge of extinction across its natural range, from South China into Vietnam. As the species has vanished from the wild, market prices have soared, further increasing illegal poaching activity. Wild areas of Hong Kong represent its last chance for continued existence in the wild, with a small breeding population clinging on to life in remote valleys and streams. The species is listed as Critically Endangered, and considered one of the 25 most endangered turtles globally.

A joint effort by the Fauna Conservation Department of KFBG and the Agriculture, Fisheries & Conservation Department (AFCD) of the Hong Kong SAR Government is working to preserve and make safe the last Hong Kong refuges, and thus protect the remnant populations that exist. At the same time, we are building an assurance colony of rescued animals that have entered our ex-situ breeding programme. Future releases will aim to boost remnant populations and repopulate suitable habitats, and the ecological niche, that this symbolic animal should occupy.

Please do not buy wild-caught turtles.